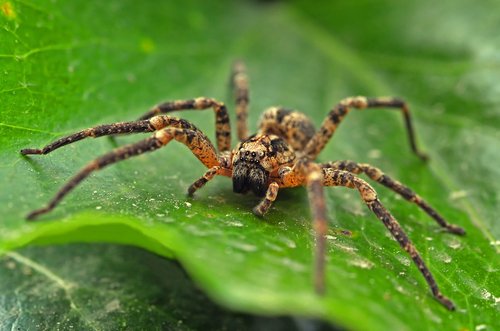 How Dangerous is the Wolf Spider’s Bite?

Hearing the words “wolf spider” may conjure up images of a super-sized wolf-hybrid monster destroying the city. Thankfully, wolf spiders are not B-rated movie monsters come to life. They are a common arachnid found throughout the United States. What they are known for is a painful bite. However, it is not deadly. Here’s everything you never knew you needed to know about wolf spiders.

Where to Find Wolf Spiders

You’re likely curious where wolf spiders live. They are adaptable and live where they can find insects to hunt and eat. This means you may spot them anywhere from fields, wooded areas, western coastal forests, and vegetation along bodies of water. You can even find them in suburban backyards and other home areas, like gardens and fences. Wolf spiders hunt primarily on the ground and do not spin webs.

Wolf spiders also live on every continent in the world – except Antarctica. Over 125 species of wolf spider live in the United States. They can be found in all 50 states.

Also read: Spiders Near Houston To Be Aware Of

Wolf spiders are nocturnal, hunting their prey at night. They earned their name through the way they hunt – by meticulously stalking. They’re also “lone wolves” and live solitary lives. They paralyze their prey by injecting it with their venom. They hunt common insects such as earwigs, grasshoppers, ants, and flies.

Wolf spiders are not aggressive toward humans. Often, when threatened, they just retreat. You’ll only get bitten if you’re directly handling one or provoking one.

If you’re unlucky and get bitten, you may have puncture marks that are visible. If not, look for any red or swollen areas on your body. While we’ve mentioned the bite won’t kill you, it is painful due to the venom. Once you’ve been bitten, clean the area with warm soap and water. Bandage your bite to prevent infection. If you become itchy, you may take Benadryl to counteract the irritation. You may experience more intense symptoms such as:

Should you experience any of these severely, seek medical attention.

How to Prevent Wolf Spiders

Even though most wolf spiders do no harm, people more often would love to rid themselves of them. Proactive spider control is your best bet against wolf spiders.

While wolf spiders aren’t lethal, their bite is painful, and can generally cause a nuisance. Being informed of their behavior and characteristics can should you come face to face with one. You can also prevent coming in to contact with them with our advice. However, if you take these measures and continue to find wolf spiders and other pests in and around your home, don’t fret. There are still other methods of wolf spider extermination. Enrolling in our Healthy House Program guarantees a clean and safe home. Join today and save $50 on the program!