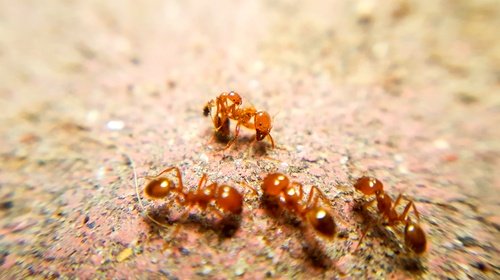 Why You Should Worry About Fire Ants

Fire ants have the power to turn a simple family picnic or backyard barbeque into a bit of a nightmare. Native to South America, these pests were unintentionally introduced to the U.S. several decades ago through ships in Alabama, and they have been spreading ever since. As they continue to make their way throughout the southern and western parts of the United States, Houston, Texas, is one of the many places fire ants call home.

Unlike typical black ants that can usually coexist with pets and people as long as they stay outside, fire ants are extremely volatile. They have the ability to injure humans, put pets in danger, and do damage to yards and landscaping. Estimates have shown that these imported fire ants cause billions of dollars of losses each year due to medical care as well as property damage.

What are Fire Ants?

These red and black colored ants are medium in size (1/16”-1/4” long) and look fairly harmless at first glance. Fire ants build large, sandy mounds which may be found in the dirt, on the edges of sidewalks, or even in roads. Mounds may be as small as a couple of inches, or they can be as large as 18 inches. Unlike typical ant mounds, those made by fire ants don’t contain a central opening in the middle. Instead, the occupants enter and leave through underground tunnels.

See Also: 8 Ants That Are Likely to Invade Houston Homes

What Kind of Harm Can Fire Ants Do

At best, fire ants are a menace socially and economically. At worst, they can be lethal.

Fire Ant Stings. If their mounds are disturbed, fire ants become extremely aggressive and bite humans or animals. And because they have a tendency to swarm, dozens of bites may occur at the same time. Fire ant bites release venom that can cause itching, stinging, swelling and blistering. The presence of multiple fire ant bites can cause the sensation that the body is burning or on fire.

Fire Ant Allergies. People who are allergic to fire ants have severe reactions that may limit the ability to breathe and could be life threatening. Emergency medical attention should be sought immediately with this type of exposure.

Environmental Issues. Fire ants are capable of causing damage to pets, livestock and other animals. Infestations may also reduce the populations of other native wildlife, insects and fish. Research has shown that the presence of fire ants in one particular area directly reduced the ability for songbirds to nest. Insecticides used on fire ants may also have a negative impact on the environment.

Economic Impact. Mounds built by fire ants can create problems with landscaping as they can disrupt not only the appearance but potentially the function of the soil and grass. These pests also seem to enjoy invading utility boxes and electrical equipment, chewing on insulation and causing electrical problems or equipment failures.

How to Prevent Fire Ants

Preventing fire ants is a continual process requiring attention and diligence. Because fire ants need water, food and a place to live, removing these is the best way to prevent infestation. Just as with controlling other outdoor pests, keeping your property well maintained in these ways will help:

See Also: What You Should Know About Fire Ants

How to Get Rid of Fire Ants

Eliminating fire ant hills can be complicated as the colony isn’t completely destroyed until the queen is dead. Some people suggest pouring boiling water on top of the mound, while others use bait or insecticide. While these options might temporarily reduce the population, they can also be very dangerous. These attempts should only be made if you know that you don’t have an allergy to fire ants, if your body is well protected, and if you carefully follow the directions on any pesticides used.

Fire ants are serious business and really should be left to the professionals for best results. If you know what to look for, you can keep an eye out for fire ant mounds and report them immediately to your pest control professional. For Houston pest control, contact Cypress Creek to help with fire ant control along with a myriad of other pests.