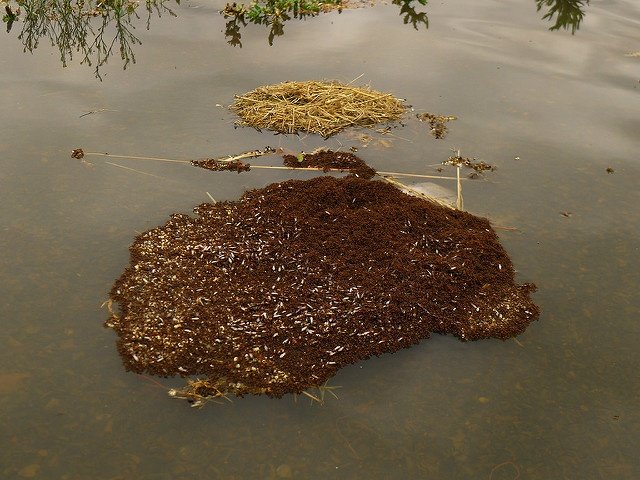 What You Should Know About Fire Ants

In late August 2017, as the damaging effects of Hurricane Harvey were revealed in Houston, one noticeable concern that developed was the unique self-preservation abilities of the fire ant. Not long after the flooding began, fire ants started appearing in mounds that created a sort of communal floatation device. Because of the fire ants’ ability to repel water and cling together, flooding brought on by storms doesn’t drown them—it simply displaces them.

After Hurricane Harvey, we have received tons questions about this unthought of effect of flooding. Hopefully this article serves as a refresher course on fire ants, as they are a concern in Houston regardless of flooding.

Here are some interesting things to know about fire ants:

Located in the southern regions of the United States, fire ants are native to South America. These pests were introduced in North America less than 100 years ago and have been spreading ever since, particularly throughout Texas over the past 50 years.

Read More: 8 Ants That Are Likely to Invade Houston Homes

Fire Ants Get Aggressive When Disturbed

While most species of fire ants are not necessarily aggressive by nature, they are protective of their homes. As they are extremely sensitive to movement or vibration, fire ants get very upset all at the same time, offering the potential for swarming and stinging in massive groups.

When given the option, fire ants will build their nests beneath objects such as logs, piles of rocks, or other covered areas. If no cover is available, mounds in the dirt may be a telltale sign that identifies fire ants. Because they like moist land, fire ants may be attracted to watered lawns, edges of ponds, river banks, and even highway shoulders.

Although they do hurt a lot, fire ant stings are not likely to be extremely harmful—except for the small percentage of people who are allergic to the venom they inject. For these people a sting can be lethal if not treated right away. It can cause an almost immediate reaction which may trigger swelling in the tongue and breathing passages, as well as other extremely dangerous symptoms.

More than just little villages, fire ants often prefer to reside in massive cities that are made up of more than 250,000 worker ants in each group. The reason fire ants are able to live in such large colonies is that they reproduce very quickly. In fact, one queen ant can lay up to 1600 eggs in just one day! Left undisturbed, many fire ants will live between 5 and 7 years—meaning that no one should suspect they’ll just “go away” on their own.

Each type of fire ant has a different role they play in the colony. As with most ants, the queen is the most important and typically lives the longest. But unlike other types of ants, fire ants colonies may have more than one queen. Other ants are male ants, worker ants, and soldier ants.  Male ants, also called drones, have the sole purpose of mating with the queen—and they die immediately afterwards.

Workers are smallest, and are the ones at the very bottom of the “raft” when colonies save themselves by floating. Workers are also responsible for taking care of the nest and retrieving food. Soldier ants are slightly larger with strong jaws, used to protect the colony from intruders. Queen ants are the largest of all and produce the eggs in order to propagate the species.

While they prefer to eat young plants and seeds, fire ants are willing to eat birds or small animals as well, depending on what they are able to find. If they are hungry, collectively these ants may be very aggressive and can kill small animals for food.

Prevention is Key for Fire Ants

Once you have an invasion of them, getting rid of ants can be really hard. As in most cases of pest control, the best offense is a good defense. Preventing an infestation of fire ants should be on your mind, even if you don’t have them yet, because their colonies grow so quickly.

Read More: Why Do I have Ants in My Bathroom

If you need expert ant control help to prevent infestation before it starts, or you believe you already have an infestation, Cypress Creek Pest Control in Houston is available for a consultation related to fire ant control or other Houston pest control problems.