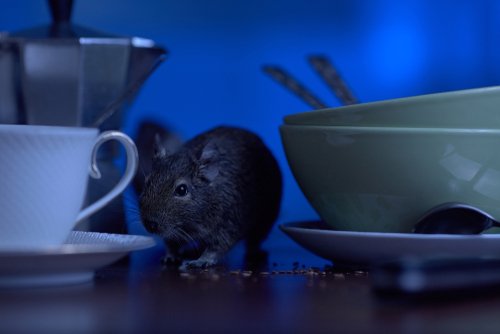 WHAT NOISES AM I HEARING AT NIGHT?

Noises coming from your attic or ceiling at night are never a good sign. Once you’ve ruled out burglars or ghosts, it’s time to consider another unfortunate possibility: pests or other animal intruders.

Don’t worry; there are a number of common animals that might hide in your attic, including rodents, squirrels, raccoons, pigeons, and bats.

For pests like rodents, pigeons, and squirrels you’ll likely hear them making sounds during the day – but could also hear them at night, especially as rats and mice look for food. For bats and raccoons, who are nocturnal, you will hear the most out of them at night.

Each makes distinct sounds at different points of the day. Here’s how to identify what noises you’re hearing.

Rodents. Rodents, such as rats and mice, make scratching and crawling noises. Sometimes, you may hear mice squeak or create a “pitter-patter” sound. Mice also make a gnawing sound. Rodents like to chew and often destroy items stored in your attic.

Also read: Preventing and Removing Roof Rats from Your Attic

Raccoons. Raccoons are the largest animal on this list, so their sounds are distinctly heavier than others. They sound as if they’re thumping or walking along the floors of your attic. They’re more vocal than any of the other animals on the list as well. You may hear various growls, cries, chirps and other noises. If a raccoon has a litter of babies in your attic, you’ll also hear cries. Raccoons rise at dusk to leave for the night to scavenge for food, so that’s when you’ll most likely hear them. You could potentially hear a loud thumping or crashing sound as they return later in the night.

Also read: Got Raccoons? Leave Trapping to the Professionals

Pigeons. Pigeons coo, making them also very vocal. You’ll hear flapping as they try to fly or move around your attic. If they’re stuck or in distress, the flapping sound will be very intense. Pigeons are most active in the morning.

Bats. Bats make light scurrying sounds as their wings are not as large as pigeons. However, a colony will cause a louder flapping sound. You’ll begin hearing these sounds around sunset, as bats start waking. You may hear squeaking and scratching sounds if they become stuck in any part of your attic.

How to Remove Animals

Most animals accidentally end up in your home and don’t mean to cause any harm. More often than not, they want to find a way out. Before beginning any measures to remove pests, alert your family members. Keep children away from any area where pests may be, as these creatures carry disease.

For general pest control, create an opening for the animals to leave. If they’re in the attic and you have a window, open it. Don’t block it. Once you believe they’re gone, then you can block the opening. Here are more specifics for various types of pests.

Rodent control. Remove excess water they could be drinking to sustain themselves. Keep all areas of your house clean as rodents are typically attracted to leftover food and other garbage.

Squirrel control. Locate where they entered and use steel mesh to seal the holes but leave the central entry hole open. Use an exclusion door at this opening so squirrels can go but not come back.

Raccoon control. Turn on bright lights and a radio. Raccoons will leave an area if the environment is unpleasant. If that doesn’t work, use a one-way door, a tunnel that raccoons can enter but not return, to get them out of your attic.

Pigeon control. If there is a window where the pigeon or pigeons are holed up, try opening it an shooing the bird out. Once it’s out, make any repairs they potentially created.

Pest control is tricky, though. If you determine you have a pest living in your attic and try-at-home methods to rid yourself of it to no success, consider reaching for professional help. For the best Houston pest control, contact us today.