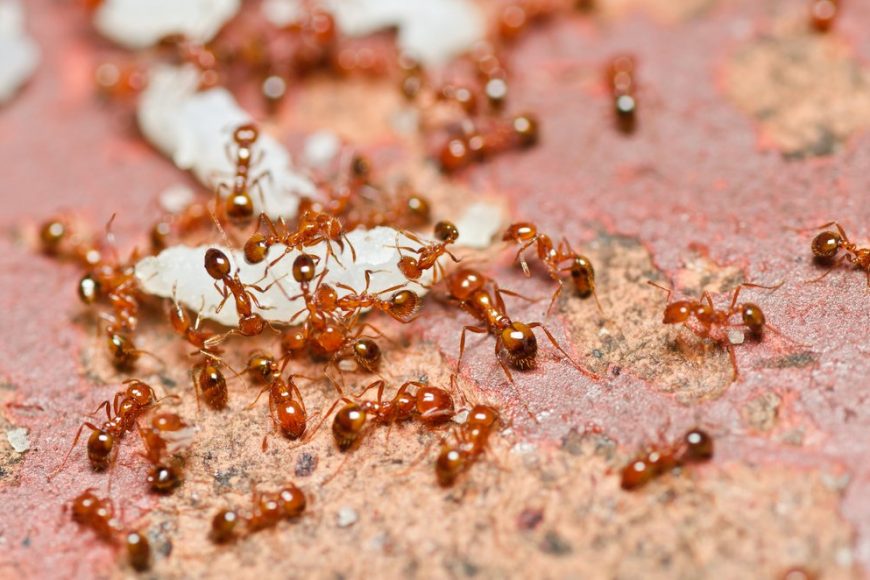 What’s the Difference Between Crazy Ants and Fire Ants?

Houston is home to many types of ants all year round. During summer, particular species of ants, like crazy ants and fire ants, start making appearances across homes more frequently. To the naked eye, these two types of ants may seem very similar, but knowing the difference is important when it comes to prevention and treatment.

Here is information on their appearance, nesting habits, and more to help you tell the difference between these two common Houston pests.

Fire ants are small, ranging between 1/16 and ¼ of an inch long. They vary in reddish colors with many having a yellow-red colored head and thorax with a black abdomen. Like other ants, they have a hard exoskeleton and six legs. Fire ants also have a stinger on their stomachs that they use to subdue prey – and sting humans if they feel like they’re being attacked.

When populations become too large for a single mound, the queen ant produces winged male and female reproductive ants. These ants leave to mate and create colonies elsewhere. Once females are fertilized, they shed their wings.

Also read: What You Should Know About Fire Ants
What Do Crazy Ants Look Like?

Officially called “Raspberry Crazy Ants,” these insects are reddish-brown and are around 1/8 of an inch long. Unlike fire ants, they have tiny hairs on their bodies. Their antennae are split into 12 segments, without a club, and are elongated.

They also have incredibly long legs and move erratically – coining the term, “crazy.” Unlike their counterpart the fire ant, which moves more slowly and in a straight line, you’ll be able to notice the quick and jerky movements of a crazy ant.

Also read: Who Are You Calling Crazy?
Where Do These Ants Nest?

Fire ants can build mounds in most types of soil but prefer open sunny pastures or parks, fields, and lawns. A fire ant mound can grow up to 24 inches in height in the right conditions, but typically are much smaller in Texas suburbs. You may also find fire ants building nests in irrigated soil or on or around rotting logs, stumps, or trees.

Fire ants are also known for having large populations within their nests – up to 1,500 individual workers in a single colony. They are also very resilient. In fact, during Hurricane Harvey in Texas in 2017, mounds of ants were seen clumped together floating on the water’s surface.

Crazy ants will nest in various conditions, both dry and moist. For example, they can be found nesting in soil, tree cavities, underneath rotting wood, and underneath buildings. Large populations have also been seen around Houston on homeowners’ lawns – another similarity to fire ants, but crazy ants have colonies even larger than fire ants.

Both breeds do not fare well in cold temperatures and will seek shelter inside during colder months. You may also find both types of insects inside your home during warmer seasons too, as they’re attracted to food sources within your house.

What Damage Can Crazy Ants Do?

Crazy ants can take over your yard and your home more quickly than a fire ant, due to their enormous populations. They have very few predators and can force out other species of ants – even the aggressive fire ant. These insects can bite, but the injury is less painful than other ants. But, while they may not hurt you as much physically, they can cause a lot of financial hurt due to their attraction to electrical equipment. Crazy ants are known to build nests inside electrical machinery and items – causing them to malfunction.

Additionally, crazy ants are more willing than other species to enter your home in search of food. In fact, they’re known for traveling long distances to find food, coming into your house in large groups through cracked foundations or entryways.

What Damage Can Fire Ants Do?

As mentioned, fire ants are equipped with a stinger, and they’re more than willing to use it if they feel like their mound is being invaded. Homeowners may be stung multiple times when they accidentally come across a nest in their yard. Although most stings result in a welt, people who are allergic to fire ants can have a severe reaction. Likewise, a person is rarely only bitten by a single fire ant. More often, they may receive a dozen stings rather quickly if they stumble upon a fire ant mound.

Outside of personal injury, fire ants pose a similar threat to electrical equipment as crazy ants. They are also drawn to air conditioning units and utility boxes. And like crazy ants, they can destroy your lawn, and enter your home through cracks or small holes in your walls and foundations.

Also read: Why You Should Worry About Fire Ants

What Can You Do to Prevent Them?

If you think you have either a fire ant or crazy ant problem, there are different ways to prevent them from becoming a more significant issue. First, here are signs you may have a problem with either type of ant:

If you see these indicators but still unsure of which ant you may have, it’s best to remember that crazy ants move in frantic, zigzag patterns. To prevent both types of ants from entering your home or lawn, consider these tips:

How Do You Get Rid of Them For Good?

Knowing the differences between these two species of ants is the first step in eliminating your problem with either. Treating different types of ants calls for different methods – especially crazy ants.

Crazy ants do not respond to common ant removal remedies and require an experienced exterminator like Cypress Creek. We’ve been providing solutions for crazy ants since their introduction to the Houston area in 2002. Likewise, fire ants require specific treatment to eradicate the problem. Our technicians can find nests, and subsequent queen ants, and eradicate the infestation. Then, we provide continual treatment designed to keep any ant out indefinitely!

Now that you’re familiar with the appearance, characteristics, and behavior of fire ants and crazy ants, you can take preventive measures against them. However, if you do see warning signs of either, and need professional assistance, contact us at Cypress Creek today.