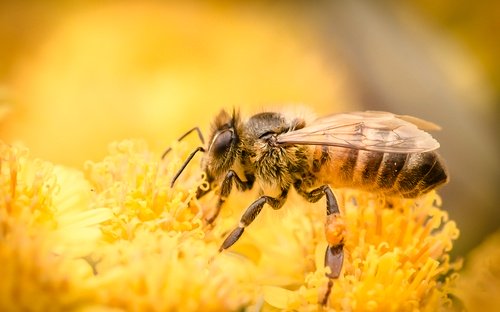 Stinging Insects & What to Do if You’re Stung

As spring arrives and the weather begins to warm, stinging insects become more common. Even if you aren’t aware of an allergy to stinging insects such as bees or hornets, it’s best to take precautions. Anyone can be adversely affected if caught in the midst of a swarm.  In fact, stinging insects account for over ½ million visits to the emergency room each year.

These are some of the most common stinging insects:

Known for their contribution of honey, these bees are very small, ranging from ½”-5/8” long and are orange/brown/black in color. Honey bees are not aggressive but will act defensive if they feel their colony is being threatened. They are social creatures, living in hives with colonies numbering up to tens of thousands of individual bees.

Larger than honey bees, carpenter bees range from ½” to 1” in size. Similar to bumblebees, carpenter bees have a large abdomen that is shiny and without fur. These bees are named for their tendency to bore into wood in order to make a place for their young to grow. While female carpenter bees may sting, they very rarely do. The largest threat of these bees is the structural damage they can do to property over time.

See Also: 3 Reasons Why You Should Call A Professional For Bee Infestations

These large stinging insects can grow up to more than 1” in length. European hornets have brown bodies with yellow stripes, a pale face, and large papery wings. These hornets typically won’t sting unless they feel threatened. European hornet nests are paper carton style with a brown paper envelope-like covering, often found in barns, outbuildings, attics, or in hollow trees.

Mostly black with white faces and other white markings, bald-faced hornets build aerial nests that are papery. These nests are typically easy to spot as they are often located on tall utility poles, overhangs, or in trees. Nests may grow to be up to 24 inches long.

Named for the yellow and black color pattern on their bodies, yellow jackets have large eyes and large papery wings. Unless they feel they or their nests are threatened, yellow jackets are unlikely to sting. These insects live in paper carton nests which can grow to be as large as a basketball. Nests may be low to the ground around plants or logs, or they may be built in the air attached to buildings, tall bushes, or shrubs.

Mud daubers are typically black with pale markings, large black eyes and long wings. They are distinguished by their very thin lower bodies from which a large end protrudes. Different from many stinging insects, mud daubers typically live alone. Nests are built by females in mud that looks like short tubes.

Brownish-red in color, paper wasps have yellow markings and large, brownish eyes. If their nests are touched, paper wasps are highly likely to sting you. Otherwise they are not aggressive. These insects construct their nests from paper-like material in a shape similar to an umbrella. Paper wasp nests are typically found hanging from trees or shrubs, ceilings of porches, door frames, roof eaves, or railings.

What to Do for an Insect Sting

Stinging insects may cause pain, swelling, discoloration, and itching. Most people don’t need to visit a doctor and symptoms usually subside within a day or two. If pain and swelling are extreme, or the sting is near the eyes or other parts of the face, contact a medical professional right away.

If you do get stung by an insect, several home remedy options are available:

Removal of a stinging insect nest on your own is not advised—in fact, it can be extremely dangerous. A pest control professional is your best resource. For pest control help in Houston, contact Cypress Creek Pest Control to schedule an inspection or services.