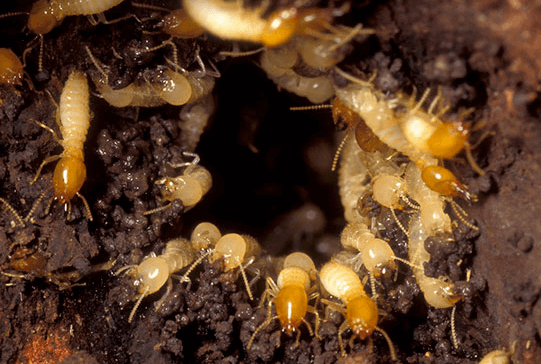 A total of nine termite pest species are known to inhabit southeastern Texas. Of these nine termite pests, five are subterranean termite species, while the other four are drywood termite species. Unlike drywood termites, subterranean termites live in colonies that are located below the ground where workers tunnel through moist soil in search of cellulose-rich food sources, most notably natural sources of slowly decaying wood debris. Mature subterranean termite colonies can contain anywhere from 50,000 to just over one million individuals, most of which are workers.

The oldest and most populous subterranean termite colonies are composed of several interconnected nesting sites that can span an area greater than 100 square meters in size. These massive networks of interconnected nests are established by workers in order to expand a colony’s foraging territory. Subterranean termite infestations are initiated almost exclusively by workers that first access moist substructural wood components that are located nearest to the ground surface. This is why subterranean termite infestations are typically found within joists, beams, girders, subflooring, and sill plates.

All termite species establish new colonies by swarming, but while subterranean termite swarmers (alates) initiate new colonies in moist soil, drywood termite alates always initiate new colonies in either moist or dry wood items. In Houston, subterranean termite workers can initiate infestations within moist substructural wood components year round, but drywood termite infestations are only initiated during swarming season, which occurs between May and July, and occasionally, between September and November.

Native subterranean termite alates in Houston very rarely establish infestations directly in above ground structural wood, but invasive Formosan subterranean termite alates frequently establish aerial nests that are completely detached from the ground soil. This can only occur if the wood being infested is saturated with enough moisture to provide a growing colony with its hydration needs.

Have you ever heard of an aerial subterranean termite infestation?