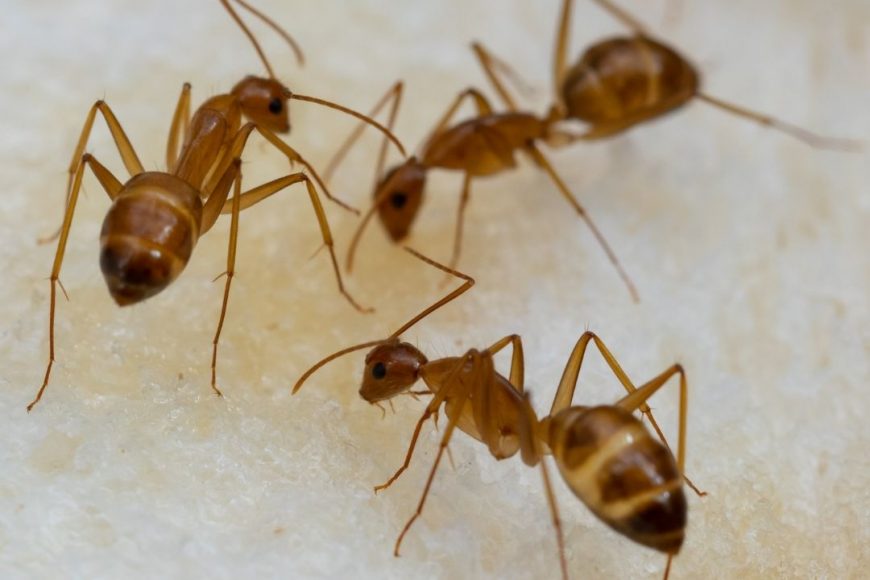 Allow us to introduce crazy ants to all those who think that fire ants are a nuisance to the homeowners. Officially called “Rasberry Crazy Ants,” these ants were first found in Houston in 2002. The exterminator found them in an electrical circuit chewing all the wires and giving an electric shock. Hence, the name crazy ants.

Why are they called crazy ants?

These ant species can form colonies a hundred times denser than the other species of ants. It consists of thousands of worker ants and numerous queen ants living in a single ant colony. These ant species have high aggression and sting aggressively. So, now you are satisfied with how crazy ants can be a problem.

Where do crazy ants nest?

Crazy ants can nest their colonies both inside and outside the house. These species usually nest around the tree cavities, in the soil, under the rotten wood when outdoors.

Crazy ants can’t live or survive in winter. They will shift their nests inside your home and find a suitable place to live when the weather becomes too cold.

Crazy ants are well known for their enormous population. They can take over your yard and home quickly. They are known for their bites, but it causes less pain and swelling than other ants’ species. These ants pose a threat when they invade your home in large numbers and get inside the electrical equipment, causing it to malfunction.

How do you prevent Crazy Ants?

Preventing crazy ants is difficult. One can have a yearly pest control program to remove these pesky pests. Other preventive measures are as follows:

How to control Crazy ants?

Typical ant control treatments do not remove Crazy ants infestation as these species have avoided many ant baits. Immediately call pest control experts because they have the necessary experience and tools to deal with these ant species.