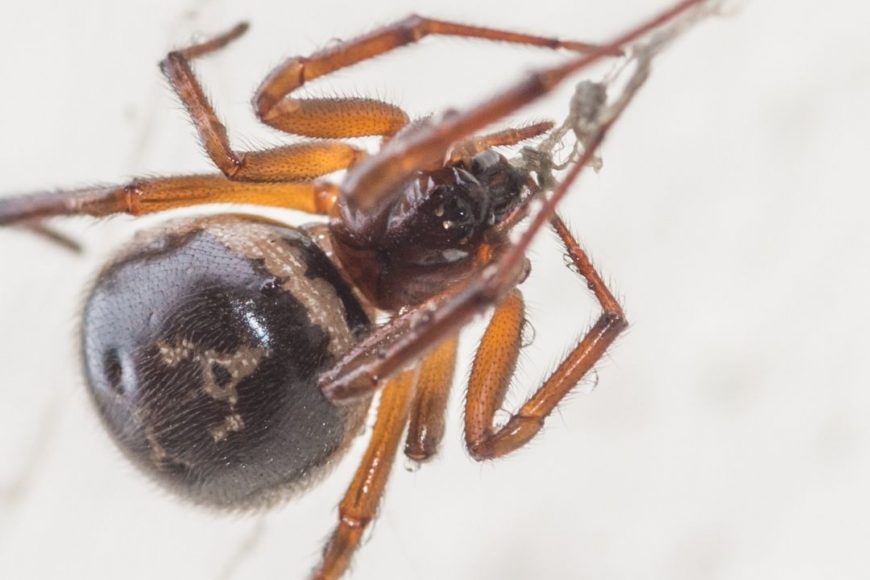 The Steatoda genus is full of species that are often mistaken for black widow spiders, and spiders from this genus are found everywhere around the world. The false black widow is not as dangerous as the black widow, but it can still deliver extremely painful bites. Let’s take a look at these spiders and see how you can tell the false black widow apart from the real one.

False black widow spiders like to set up inside walls, in clutter, dark spaces, near fences, under tree bark, and they can set up both indoors and outdoors. They have a cobweb that is built irregularly, which does somewhat resemble the cobweb of a real black widow.

Like all spiders, the false black widow is carnivorous, and it feeds on other insects. However, what is interesting about this species is that it may actually prey on real black widows as well as other spiders.

The false black widow is not aggressive, and will mostly bite in a defensive situation – when it is squeezed for example. This behavior is similar to that of real black widows, with most bites occurring when the spider is hiding inside shoes or clothes, and someone puts on the shoes or the clothes and the spider is pressed against the skin.

The bite is rarely felt, but within a few minutes, a burning sensation develops which quickly turns into radiating pain. After about 20 minutes, the bite area will begin to swell. You might also notice two small puncture wounds in the area of the bite. The bite does not have long lasting effects, and there is antivenom available if someone goes to the hospital thinking they were bitten by a real black widow.

Dealing with a widow infestation

Whether you have a real or fake black widow infestation, you generally want to stay away from the spiders, because the bites can be painful or dangerous. The best way to deal with such an infestation is to call over a pest control specialist. Contact us today if you are dealing with widow spiders in the home.