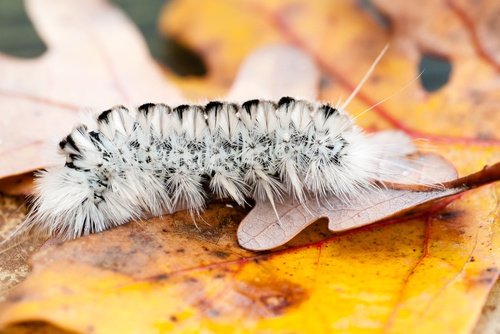 Most people have come across caterpillars in their gardens or yards and usually think nothing of them. Children often find caterpillars interesting and may even try to pick them up and play with them. These larval-stage creatures live to eat, which is why they are typically found on bushes, plants, and trees. In fact, depending on the species, a group of caterpillars can ravage the foliage off of a large tree in a matter of days or even several hours.

Caterpillars eat themselves silly so that they can be well-fed when they enter into their pupal stage. Eventually, these many-legged critters will form a cocoon and finally turn into moths—or even beautiful butterflies. And while most of them are harmless, a few of them have a protective measure of venom in their prickly fur coats. And this means that you absolutely do not want to touch them!

Because some caterpillars can be dangerous, you should avoid touching any of them without first having them professionally identified. Watch out for these three poisonous, dangerous caterpillars that can be found in the United States:

Appearing to be a harmless and cuddly creature, the furry Asp caterpillar is also known as the Puss caterpillar. Commonly found in the Houston area, these critters seem to be growing in population in recent months, possibly related to extreme flooding in the last year. Asp caterpillars are brown or gray and very furry. They enjoy oak trees and are most commonly found during autumn months.

Stings from asps are not likely to be deadly, but can cause some serious problems. Severe stings may result in several days of throbbing and can be treated by over-the-counter antibiotic ointment. More extreme symptoms can include swollen or painful lymph nodes, nausea, headache, vomiting, and abdominal pain. Although rare, an Asp sting may cause a person to experience respiratory distress or shock.

Causing extreme pain with their venomous stings, Io Moth Caterpillars start out as an orange color but eventually turn into pale green with red and yellow/white stripes. The prickly spines on this caterpillar are connected to glands that secrete poison. Symptoms of a sting typically feel like extreme itching or burning, usually much more extreme than a bee sting. Some people may have severe allergic reactions which may require attention by a medical professional.

With a fluffy appearance that makes them look more like teddy bears than pests, these caterpillars have the power to poison. Mostly white with black markings along the back, the Hickory Tussock caterpillar is sometimes called Hickory halisidota. This caterpillar excretes venom that can cause a rash on the skin, similar to poison ivy or stinging nettles. Swelling, pain, and reddening skin are common and can be managed with over-the-counter allergy medicine or topical ointment. Some people who are more allergic may experience nausea or vomiting.

Although most caterpillars are harmless, never risk touching one with your bare hands. If you find one caterpillar, use gloves and remove it with a shovel. If you do find yourself “stung” by a caterpillar, some experts suggesting using a piece of duct tape on the skin to pull away the venomous spikes as soon as possible prior to treatment. For severe reactions, contact a medical professional.

Rather than handling the problem yourself, your best course of action is to contact a professional to identify and rid your property of these critters. If you find that your property is infested with any type of caterpillars contact Cypress Creek, your Houston pest control professional.