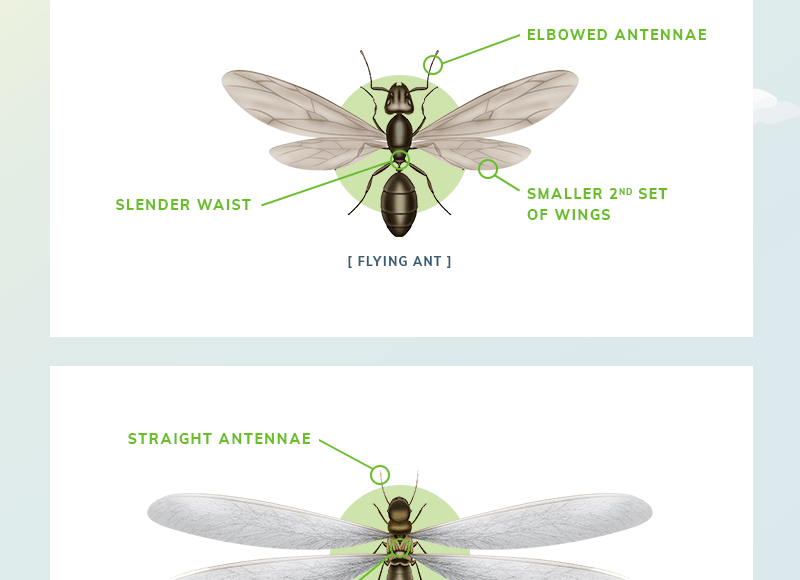 [Infographic] The Differences between Flying Ants and Termites

Finding pests in or around your home is never a pleasant experience – especially when it comes to termites. Termites can potentially cause thousands of dollars’ worth of damage to your home that can take a lot of time and effort to reverse.

What’s more, is that termites are often mistaken for flying ants because of their similar appearance. However, just because they look alike, doesn’t mean the method used to exterminate them is the same. That’s why it’s necessary to understand the difference between these two pests to take preventive measures from controlling them and ultimately saving your home. Here are the key differences between flying ants and flying termites.

At a glance, flying ants and termites look very similar as they’re both small, dark pests. This makes it hard to distinguish between the two. But by carefully observing their bodies and wings, you’ll be able to tell the difference. Here’s what each looks like at close range.

Flying Ants – Flying ants have kinked antennae, with their front wings being slightly longer than their back wings. You should be able to see three distinct body regions when looking at a flying ant.

Flying Termites – Unlike flying ants, flying termites have straight antennae. Their front and back wings are equal in length and about twice the size of their body. A flying termite’s overall body is one long, uniform shape.

Also read: 8 Ants That Are Likely to Invade Houston Homes

Both of these flying insects are more commonly seen in the warm, humid weather. Nevertheless, you’ll likely spot flying ants and flying termites in different areas in and around your home.

For example, you’re more likely to see a flying ant outside, often near your garden, windows, or doors. You may spot them in your kitchen as well, or other areas in your house where you may store food. Water leaks also attract ants so you could locate them near a damaged faucet or something similar.

When it comes to termites, you may have a harder time spotting them, as they dwell in small spaces within your home. This can include wall cavities, attics, or the foundation of your home. Because termites eat wood, you’re more likely to see them around these areas, or other wooden surfaces.

Both pests leave their colonies in large numbers, or swarms, to seek a new one when they’re ready to reproduce. Because of this, swarming is well-known as the mating season of both flying ants and termites. As mentioned, they both prefer swarming in warm weather, but flying ants prefer summer months while termites are more prone to swarm in springtime.

After forming a new colony, these pests quickly begin reproducing. All termites shed their wings once they’re done mating and continue living. However, a male flying ant dies after mating, while a female flying ant continues to live. These survivors, like termites, shed their wings. But as described, the wings of a flying ant are shorter and uneven, while termite wings are longer and uniform. If you see discarded, look for these key differences to determine if you’re dealing with ants or termites.

Key Indicators They’re In Your Home

For flying ants, the following are indications you could have an issue:

What Should You Do?

If you see any indications of swarmers – or outright see them – this means you may have a colony living in your walls. Colonies can multiply quickly, and the longer they’re in your harm, the more potential damage they can cause. That’s why you should act immediately and enlist help from a pest control expert. Experts are the most effective way to handle a pest control issue such as this. If you genuinely think you have either insect infiltrating your home, contact us now.