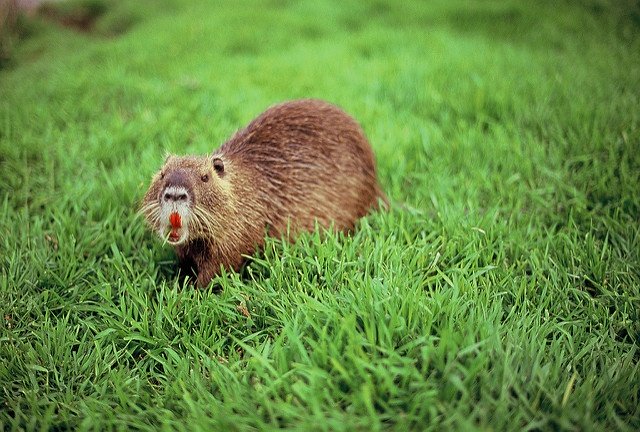 Did I Just See a Giant Rat?

What you probably saw was a nutria. Nutrias are large aquatic mammals brought to the United States from South America for their fur. When fur fell out of favor, the nutria were released in the wild to wreak havoc on our ecosystem. Nutria are brown in color and resemble beavers without the flat tail. They have large orange teeth and a rat-like tail. Since they are a non-native species it is legal to remove them.

The reason they are destructive is because they are primarily herbivous eating, cattails, swamp grass, reeds, and sawgrass. They also will move onto other crops such as sugar cane, wheat, corn, rice and other sugary crops. They don’t just stop at destroying crops. Nutria will burrow into dams and levees weakening them; leading to costly repair or even a disastrous failure.

Nutria live in wetlands. You will find them in canals, ditches streams, marshes, ponds and swamps. Many communities in the Houston area have water features and nature preserves. Nutria will make their homes in these areas causing residents to want them removed.

Nutria are difficult to capture and this is best left to the professional. There are hunters that will shoot nutria in crop fields. That method will not work in a neighborhood, neither will leg trapping where there is the danger of children or pets being harmed. Poisoning nutria is another method used that is not suitable for ridding of nutria in the city. The best option is to trap them humanely.

Nutria should not be re- released. They have been know to travel miles back to the area they were originally trapped in. Also in many cases it is illegal to release them since they are a non-native species and you would only be dumping your problem on someone else.

The next time you see a nutria you will know it is not just a giant rat.