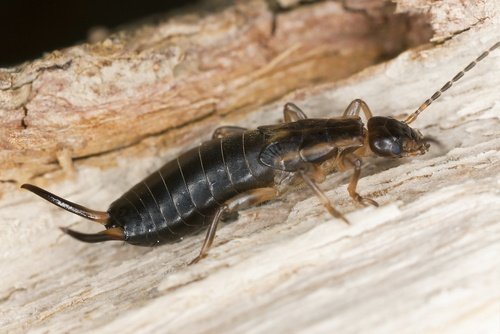 While they get their names from the idea that these little critters crawl into your ears and lay eggs, the truth about earwigs is that their reputation is worse than reality. In several different languages (including French, German, Russian, and English) these little guys are named for crawling into ears. Really, this is a misnomer because these pests are no more likely to crawl into your ears than any other critter, such as spiders, moths, ticks, fruit flies, or even bed bugs.

If they are named for crawling or “wiggling” into ears but they really don’t, it begs the question about what other information regarding earwigs is also untrue. These myths and legends about earwigs have made their way around, but don’t have much grounding in reality.

Earwigs are mid-sized insects with flat bodies that are usually black or brown in appearance. Sometimes they have reddish color and/or stripes on their limbs or heads. Ranging from ¼” to 1 ¼” long, the pinchers on the ends of their forelegs are their most notable feature.

Although they might come inside at random times, normally earwigs don’t want to live inside a house. In fact, they prefer to live near rotting wood, bark, rocks, or other organic debris. They like damp, dark places and are nocturnal so you are unlikely to see them out and about in your home during the day. Some species of earwigs can release a foul smell as a response to being threatened.

Getting Rid of Earwigs

While these pests are rarely harmful to people, you still don’t want them in your house. If an occasional earwig gets into your home from outside, simply brush it outside and give your house a good vacuuming (paying special attention to dark corners).

If you want to prevent an earwig infestation in your home, there are some things you can do to make your home less interesting for them.

If you regularly find earwigs in your home, you may have an infestation. In this case, your best course of action is to contact a pest control professional to assist you with a healthy plan to get rid of earwigs. For Houston pest control, contact Cypress Creek for prevention, inspection, evaluation, and extermination.