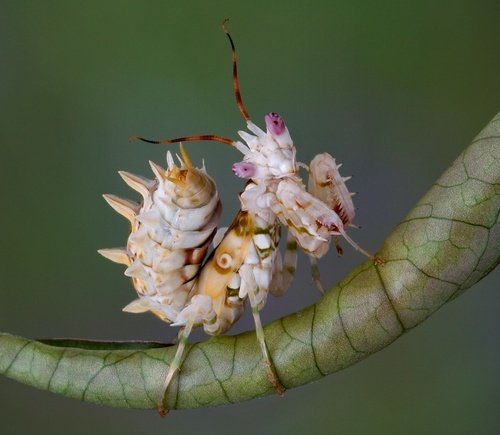 9 MOST UNUSUAL AND UNIQUE INSECTS

Although they become pests when they get around our property or inside our houses, insects can also be fascinating creatures with their short life-spans, interesting lifestyle habits, sizes, shapes, and colors. Many of the most interesting insects come from places far and wide, all over the globe.

While you probably wouldn’t want any of these in your home (unless keeping them as pets in an aquarium), here are some of the most interesting, unique, and unusual insects we have found that cause us to pause and take a moment’s notice:

Located in Southern Africa, this insect is extremely small as it measures only around 38mm. As many insects in the mantis species, this one may look like a pretty flower but it’s actually a cannibal—willing to eat another mantis that it runs across. Also interesting, the egg sac of the female Spiny flower mantis can be up to 300% larger than its own body!

We usually think of insects being small, but that’s certainly not the case with this one. Measuring up to four inches long and weighing up to 3 ounces or more, this beetle comes from the scarab family of beetles. Native to Africa, these giant beetles like to eat protein as well as dead plants in the wild, which makes them a useful part of the ecosystem. Goliath beetles are so large that some people like to keep them as pets—and then they are happy to eat dog food, cat food, or other domesticated food sources.

Not only is this the strongest insect on earth, but technically it is also the strongest animal. Its ability to carry up to 850x its own body weight on its back makes the Hercules beetle the envy of every human weightlifter ever.

Hailing from down under in Australia and New Zealand, this guy can grow to be up to 20 inches long if including the arms and legs. The category of stick insects contains more than 3000 species, and some of them even have wings and can fly.

Able to be heard over ¼ of a mile away, the noise of this cicada reaches up to 120 dB at close range. This is similar to that of a nightclub where music often reaches around 100 dB or the equivalent of listening to a jack hammer from 50 feet away.

One of the strangest looking insects on the planet, the Thorn Bug is found in Central and South America as well as parts of Florida. A fairly new arrival, not much was known about this species until the 1950s. An adult measures around ½” and is usually a variation of green with a point on top that makes it look like a thorn when sitting on a tree branch.

Termites are infamous for their ability to destroy wooden structures, causing more damage to homes than storms or fires. The queen of the termites can lay between 5,000 and 7,000 eggs each day, which is why infestations can happen so quickly. The queen herself can live up to 50 years, which is a very, very long time for an insect.

This interesting species of dragonfly can fly at speeds of up to 35 mph, making it the fastest insect in the world related to flight speed. One of the most recognizable and largest dragonflies found in the US, the Southern Giant Darner has blue and black coloring with wings that almost appear invisible. This insect is often hunted by hummingbirds, but has extremely good eyesight which helps it to flee from its predators.

With a long beak-like stinger, assassin bugs use these to repeatedly stab their prey, holding down the insect while stinging it. They inject a numbing substance into the prey, which eventually turns the innards into liquid so that they can suck, it out.  May be found in most of North America.

While some of these species don’t have access to the United States, others (such as termites) are prevalent in the Houston area. If you suspect you have an infestation of these or any other insects, contact your local pest control professional as soon as possible.