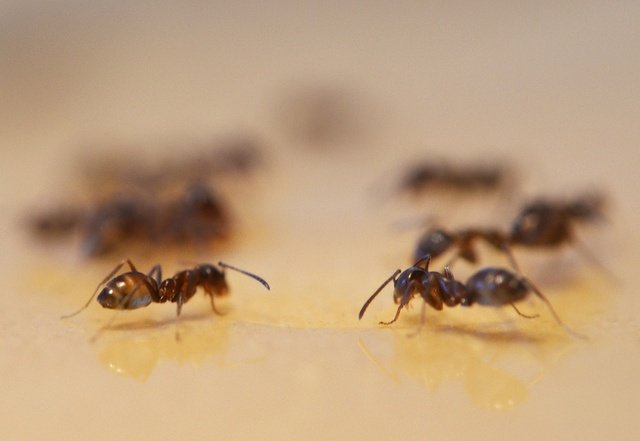 8 Ants That Are Likely to Invade Houston Homes

Ants are one of the most common pests in and around the home. They are social insects and are grouped in colonies. Ants can be a challenge to identify without the proper equipment and experience. In many cases, the best way to confirm the identity of an ant is to enlist the help of a pest management professional.

There are three categories of ants: Worker ants, males and queens

Ants have a wide variety of nesting habits and food preferences. Some ants build nests in soil others nest in damp or rotted wood while others nest in homes behind moldings, baseboards, countertops etc.

Ants feed on different types of food, including starches, meats, fats, sweets and honeydew (a sweet liquid produced by aphids and scale insects. Knowledge of ant food and nesting preferences is very important in controlling them. This is why identification is so important. In most cases the solution to eliminate the colony is to find and treat the nest killing the queen.

There are many different types of ants in Texas

One of the most common ant species in eastern Texas and throughout the southeastern U.S. are fire ants. Fire ants can be identified by their reddish-brown coloration, double pedicel, and by the variability in size of the workers. In addition, fire ants make obvious  mounds with no visible entrance holes on the mound itself. One of the most characteristic behaviors of the fire ant, however, is its aggressive response to nest disturbance including a vigorous and painful sting.  Fire ants almost always nest outdoors, although they will enter buildings in search of food and water, especially in late summer. There are many commercial fire ant products on the market to treat the mounds.

Carpenter ants are generally large, and may be solid black, brown, or a combination of black and orange. Workers are variable in size, have a single pedicel, and a smooth, curved thorax in profile. Carpenter ants are mostly nocturnal, coming out at night to follow trails along fences, tree limbs, water hoses or other linear objects. They do not sting, but can bite. They nest in hollow trunks and branches of trees, but will also make their homes in hollow doors, boxes, and the walls and ceilings of buildings. It is best to replace damaged or decaying wood. It is best to apply insecticide directly into the nest.

Acrobat ants are medium-sized ants that are sometimes mistaken for carpenter ants because of similar coloration and nesting habits. Acrobat ants are quite distinct from carpenter ants. Acrobat ants have two pedicels, workers are all the same size, and they have two spines on the thorax. Unlike carpenter ants, they are mostly active during the day. When disturbed, acrobat ants lift their distinctive, heart-shaped abdomens into the air as a defensive posture, much like an acrobat might balance on her hands. Acrobat ants most commonly nest in trees, but will also make their homes in the walls and insulation of structures. Nests can be treated with a residual insecticide. If they are found indoors inject an insecticide dust in the voids.

Pharaoh ants are tiny ants (1/32 inch-long) that frequently nest and live indoors. These ants are an invasive species that arrived from Africa. Pharaoh ants were named because they were found in ancient Egyptian tombs. They are yellowish in color with a dark-tipped abdomen. They have two pedicels and all workers are the same size. They make their nests in any dark, narrow space and may be found nesting in cardboard boxes, electrical boxes, in wall voids, etc.  Pharaoh ants are picky eaters, and can change their eating habits from foods high in sugars and proteins.  Specially designed pharaoh ant baits are usually necessary for good control. Elimination of Pharaoh ants is difficult because insecticides cause the ants to “bud” creating new colonies. Over the counter baits are not effective against Pharaoh ants and a Houston pest management professional has the tools and baits to eliminate these ants.

Crazy ants are famous for their fast and erratic running behavior.  They also may be distinguished from other ants, like the Argentine ant, by the many hairs on their body, including four pairs of hairs on the top of their thorax.  Crazy ants are dark brown ants that have  long legs and antennae. They are extremely fast moving.  It commonly infests buildings, especially in the warmer, more humid parts of the state.  A new, exotic species of crazy ant, in the genus Nylanderia, has recently become established in upper Gulf Coast and some parts of the hill country of Texas.  It promises to become an  important pest of homes in areas where it is introduced.  Crazy ants nest in a variety of locations indoors and out.  Indoors, look for nests in the soil of potted plants. These ants are small in size but thousands in numbers.

Odorous house ant is a common ant that makes its nests outdoors under mulch, stones, and inside and under other objects. They are medium-sized, with a single pedicel that is hidden from above and difficult to see. They are smooth bodied with relatively few hairs, and produce a distinctive, licorice-like or rotten coconut, smell when crushed. They are attracted to sweets.  Odorous house ants most commonly nest outdoors, but will also nest in bricks and wall voids and other interior locations. If the nests are not located treat the building perimeter with a residual spray. If baiting use a bait for sweet feeding ants.

Rover ants are a relatively new pest in Texas. These are tiny ants, similar in size to the Pharaoh ant, but stocky and darker brown in color. All workers are the same size. They are frequently seen along sidewalk and house edges, on the trunks of trees and in a variety of outdoor locations. They do not sting, but will enter homes where they are attracted to sweet foods.  Like odorous house ants, they nest in the ground; but colonies will thrive in a variety of locations including the walls of structures.

Leaf Cutter are large ant is easily identified by its distinctive nest and leaf-carrying behavior. Leaf cutter ants live outdoors in the soil.  The mounds constructed by the ants are crater-shaped and usually clustered together in a “town”. The ants carry freshly cut and dried leaves and other plant material to the large, subterranean nest.  These materials are carefully placed into special “gardens” on which they grow a special kind of fungus, which is eaten by the ants. Worker ants vary in size and are reddish-brown in color. They have long legs and three sets of spines on the thorax, spines on the head, and a smooth abdomen. They rarely enter homes but can be common in urban backyards, especially in eastern third of the state and in the central hill country of Texas.

Read all labels carefully when buying insecticides and before use. Remember the label is the law and the information will advise you as to the proper use.

Angelica Schultz
16:46 29 Mar 22
The two gentlemen who come out to do our quarterly inspections for our home are wonderful! They are the sweetest men and build great relationships with their customers.
See all reviewsWrite a review